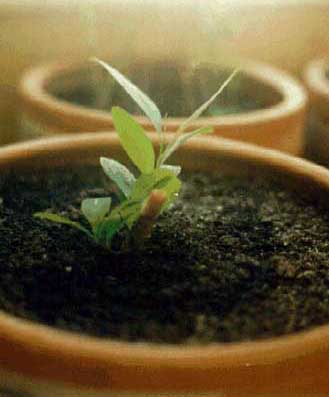 In its native habitat, the coca plant is resistant to drought and disease. Coca is a small shrublike tree that doesn't need irrigation. Its leaves are green, oval and tough. Its flowers are small and greenish white. A red fruit is produced with a single seed.

The introduction of coca to England was pioneered early in the nineteenth century by the Royal Botanical Gardens at Kew. However, the coca plant has yet to find a place in orthodox Western horticulture.

The growth of Net-based ecommerce in the early Twenty First Century nonetheless spurred an upsurge in demand and supply among horticulturalists across the globe. Gardening enthusiasts who visit Cocomama (2003) are told: "If you're interested to grow coca plant for hobby, research or conservation purposes, feel free to order the seeds."

In the 1980s, millions of drug-naïve Americans were introduced to "decocainised" coca tea imported from South America. The legitimate cultivation of Peruvian coca, and also the production of all Peruvian cocaine licensed for pharmaceutical export, was controlled by the government's own National Enterprise Of Coca. In a bid to expand and diversify its product range, the National Enterprise Of Coca promoted the benefits of coca in the form of a wholesome traditional beverage. This state-sponsored export-drive was successful: overseas demand proved brisk. From 1983, 'Inca Health Tea' sold especially well in the North American market. Lemongrass and other flavours were added to cater to American palates. Soon maté de coca could be bought in tea-shops and grocery stores in US cities.

Maté de coca is indeed an agreeable and invigorating mood-brightener. Maté de coca is also extremely benign: patients at the San Francisco National Addiction Research Foundation, for instance, were encouraged in the 1980s to drink as much mate de coca as they desired to help wean themselves off cocaine. When consumed in generous quantities, coca tea is remarkably good at easing drug-cravings. However, this is because the average "decocainized" tea-bag contains 5 milligrams of cocaine. 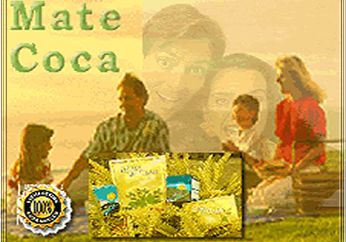 "The Divine and Magic Plant of the Incas"
Coca tea: ordering info