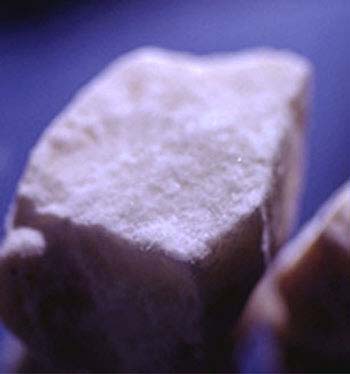 Cocaine is a powerful constrictor of blood vessels and a local anaesthetic. It is also a potent psychostimulant. The physical effects of cocaine on the user include excitement, alertness, tachycardia, pupillary dilatation, raised body-temperature, hypertension, brochodilation, enhanced glucose availability, and increased motor activity - all part of the "fight or flight" syndrome.

Taking cocaine also also gets you high. Its half-life in the plasma, however, is only 50 minutes; and the euphoria soon fades. Freebase/crack users desire more of the drug far sooner than users of the hydrochloride salt.

The rewarding properties of cocaine derive mainly from its effects on the neurotransmitter dopamine. The dopamine system is involved in the control of mood, motivation, cognition, locomotion, sexuality and endocrine function. There are only some 30-40 thousand dopamine neurons in the brain, but both the axons and dentrites of the dopamine neurons are unusually well arborised - with as many as 100,000 synapses for each dopaminergic neuron. Their distinctive morphology reflects dopamine's role in the "encephalisation of emotion".

Cocaine induces elation primarily by blocking the dopamine transporter. The blockade increases the availability of free dopamine in the mesolimbic pleasure-centres of the brain. Degree of transporter occupancy is correlated with the intensity of euphoria. Higher doses and faster routes of administration create vivid memories and intense cravings. But the biological substrates of pure pleasure remain elusive. Investigation of the possible final common pathway of pleasure in the brain continues. Endorphins and enkephalins activating receptors in the ventral pallidum apparently play a role too, as does the orbitofrontal cortex.

Whatever its mechanisms, and unlike most clinically-approved mood-brighteners, cocaine is a pro-sexual drug. Taken before sex, it can induce prolonged and intense orgasm. Cocaine-induced lovemaking, however, is not especially warm or empathetic.