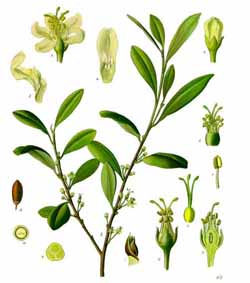 LIMA, Peru — It looks and tastes pretty much like the many brands of bottled iced tea that line American supermarket shelves — but don't drink it before a drug test.

Kdrink is one of two new bottled beverages to hit Peruvian stores this year using a formula made from coca leaves, the base ingredient in cocaine. Each bottle of Kdrink contains a trace 0.6 milligrams of the outlawed stimulant.

Although that amount of natural, unprocessed cocaine carries less kick than a cup of coffee, it is enough to create a legal headache for exporters. With the notable exception of Coca-Cola, products using coca leaves are banned in most nations beyond the Andes by strict U.S. and U.N. import regulations.

But the two new Peruvian drinks — Kdrink iced tea and Vortex energy drink — hope to buck the system and find legal paths into foreign markets. The makers of Kdrink believe many nations will allow their drink if vague anti-coca rules are clarified, while the bottlers of Vortex are banking on a cocaine-free coca formula.

Pitching the pick-me-up possibilities of coca leaves is nothing new. In 1886, an Atlanta pharmacist invented Coca-Cola as a brain-stimulating tonic that combined cocaine and an extract from the caffeine-producing kola nut.

Coke dropped cocaine from its recipe at about 1900, but the secret formula still calls for a cocaine-free coca extract produced at a Stepan Co. factory in Maywood, N.J.

For decades, Peruvian authorities with assistance from Washington have sought to eradicate illicit coca production and persuade farmers to switch to legal crops. But the black market demand for cocaine around the world means coffee, pineapples and other crops promoted as alternatives by the government often fail to match coca's profit margins.

In February, hundreds of Peruvian coca farmers from remote mountainous jungle regions met in Lima. Among their demands: That the government end eradication campaigns and develop new markets for coca-based products.

Devida, Peru's counter-drug agency, estimates that 90% of the country's coca-leaf production goes to the narcotics trade, but says it is open to finding new legal uses.

"Right now the best alternative crop is legal coca because it has the best price," said Fernando Hurtado, director of alternative development for Devida. "What we want to avoid and fight is coca going to narcotics traffickers."

Thousands of years before the existence of processed cocaine, highland Indians chewed coca to ward off hunger and fatigue. Considered an integral part of Peruvian culture, coca is offered to Andean gods and sold in packaged tea bags in grocery stores.

To meet local demand, Peru permits the legal cultivation of less than 30,000 acres of coca bushes.

Eduardo Mazzini, director of Kokka Royal Food & Drink, says the idea for Kdrink arose two years ago. He says some Spanish friends were visiting the former Inca capital of Cuzco and became enchanted with the coca tea served to tourists as a remedy for altitude sickness. They suggested bottling the tea.

Since then, Peruvian and Spanish backers have opened a sales office in Spain and invested about $300,000 in producing Kdrink, Mazzini says. The tea sells for about $1 in 10-ounce bottles that proclaim "divine energy."

Silvia Dongo, a pharmaceutical chemist who helped develop Kdrink, says the beverage provides energy from its 15 vitamins and minerals, 12 amino acids and 14 to 16 alkaloids that are found naturally in coca leaves.

"Drinking coca beverages is a way to seek a natural and healthy stimulation," she says.

Meanwhile, Vortex is seeking a share of the "energy drink" market dominated by the likes of Austria's Red Bull, a hyper-caffeinated carbonated beverage popular with young club-goers who often mix it with hard liquor before hitting the dance floor.

Unlike Kdrink, Vortex's makers decided to tackle the export problem by removing two blacklisted stimulants found in coca — cocaine and egonina — from their formula.

"Coca has been demonized for too long," says Vortex co-founder Christian Chang, who extols the leaves' healthful attributes. "Having said that, coca does have its problems."

The company is pursuing cocaine-free certification from the Peruvian government before presenting Vortex to U.S. authorities for approval, which would open energy-drink markets worldwide, Chang says.

In the meantime, the company is pursuing the Peruvian market by selling 8-ounce bottles of Vortex for less than $1, which is less than half the price for its imported competitors, Chang says.

The company met its goal of capturing 10% of the market in February, he says, and by late March had sold 70,000 bottles since the introduction Jan. 20.